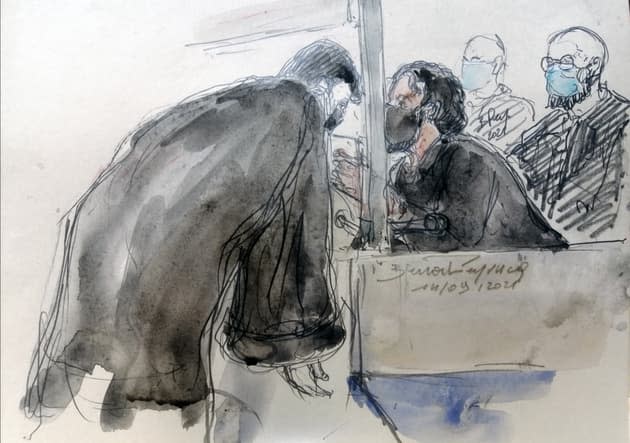 “The pressure is mounting among the defence, they are not well, it shows,” said a lawyer for victims of the November 13 attacks on Friday. The Assize Court specially constituted to try the 20 accused of the most deadly terrorist attacks committed in France had just heard the requisitions pronounced by the Advocate General Camille Hennetier, and in particular the heaviest sentence of the Criminal Code, imprisonment. incompressible life sentence against Salah Abdeslam.

From this Monday, the defense lawyers will have the heavy burden of pleading to try to obtain the acquittal, as for Ali Oulkadi, one of the three defendants who appear free, prosecuted for concealment of terrorist for having transported Salah Abdeslam in Brussels during his escape, and against whom 5 years in prison were requested, or a reduction in sentence as for the only member still alive of the commandos of November 13, only to be tried as “co-author” attacks.

His lawyers will in particular have to convince the Assize Court that, contrary to what the national anti-terrorism prosecution thinks, “a favorable future development” is possible. And thus avoid him an incompressible period of safety.

“We know the axes, we know what there is to plead, because there have been nine months of hearing, we know what we want to say. But the requisitions will be fundamental to know how the accusation is being constructed, how the accusation takes note of these nine months of trial”, explained on the set of Daily Me Olivia Ronen, Salah Abdeslam’s lawyer, a few days before the requisitions.

“The main axes in mind

With Me Martin Vettes, the young lawyer, chosen by the terrorist to defend him after six years without counsel, will speak on Friday June 24, the last day devoted to defense pleadings. “The idea is not to repeat what has been said, but to have something a little new, as much as possible”, commented the lawyer who estimated that she would write her pleading “on the last day” .

“Why would it be written, had fun on Friday Me Gisèle Stuyck, Osama Krayem’s lawyer. I do not write my pleading.” The Belgian lawyer, who will plead on June 20, claims to “have axes in mind”. “We’ve been working on it for nine months, we know what we’re going to say,” she insists. His client has also remained silent for almost the entire trial, refusing to appear since last November, explaining that he “lost hope” in French justice.

Osama Krayem’s counsel, who defends him alongside Me Margaux Durand-Poincloux, did not wait for the requisitions – life imprisonment with a 30-year security period was required at the against her client considered by the prosecution as “a full member of the November 13 commandos – to determine what she was going to plead.

A little further on the defense benches, his colleague Me Negar Haeri recognizes that as his argument approaches on Tuesday, the pressure is mounting in the face of this “unprecedented” exercise with “such solemnity”.

“I have the main axes in mind but I will write a few elements, a few formulas, which must be said but which, with the stress, could be forgotten, develops the lawyer of Mohamed Amri, one of the “conveyors” of Salah Abdeslam during his flight to Brussels the day after the attacks. We do not want to miss our argument, even less here.”

For the lawyers, the objective will be to respond to the defense arguments. And in particular on the debated qualification of criminal association of criminal terrorists which is reproached to all the defendants, the national anti-terrorist prosecutor’s office considering that to find them guilty of this offense, it is not necessary “to prove that the author had precise knowledge of the final terrorist project, nor that they themselves had any terrorist inclinations.

During a defense argument, the lawyer also aims to deliver information about the accused or words that he was unable to express during the hearing. “We have privileged knowledge and access to our client, explains Me Gabriel Dumenil, criminal lawyer, who has intervened in several terrorist cases. There is a huge gap between the vision that people have of our client and our vision of the latter. We are their mouthpiece.” A role that is not limited to that of substitute.

“A really good pleading must combine substance and form, personality and elements of the hearing, it is a subtle mixture of what exists in the file, what is objective and what happened in the thread of the debates”, details the lawyer who recently defended Willy Bardon or Aïssa Zerouati, nicknamed “the rapist of the forest of Sénart”.

In fact, the arguments are often finalized a few minutes before pleading. If the criminal lawyer assures that he has in mind the pain of the civil parties when he pleads, even when the facts are fully disputed, the fact remains that the central question which guides the lawyer is that of the responsibility of his client. Me Marie Dosé and Judith Lévy will be the first to get up this Monday to answer this question about their client, Ali Oulkadi.